Last week on Girls, we saw the dangers of going on a cocaine binge with your former boyfriend turned gay roommate who revealed he had sex with your best friend.  In the world of Hannah, she blames everyone and makes Marnie feel sorry for being a “bad friend!” I was really hoping for Nancy Reagan to knock on Hannah’s Brooklyn apartment door wearing her white pearls and a red skirt suits expressing to Hannah, “Just Say No!” 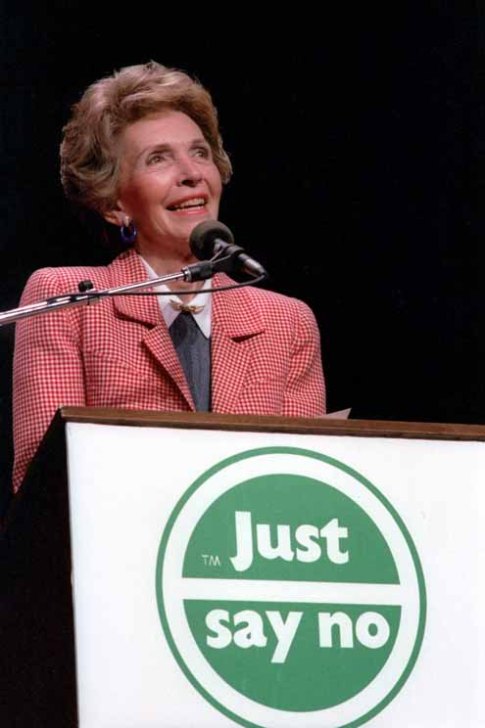 The next episode opens with Elijah moving out and again, he’s full of attitude and pissed off that Hannah gets to keep all of the furniture he brought into the apartment, so he leaves with nothing.  Would this be the way Hannah acts if she ever did get a divorce from a future lover?   Hannah is co-dependent on someone, in season one she was living with Marnie and stuck with the rent check after she was cut off, she used Elijah in the first half of the second season to help pay the rent.  What will happen to her now that she doesn’t have another person to help her out emotionally and financially? The idea of living with Elijah in the end was not a smart move!  (Let’s just hope she doesn’t have to look for a new roommate through Craigslist!) 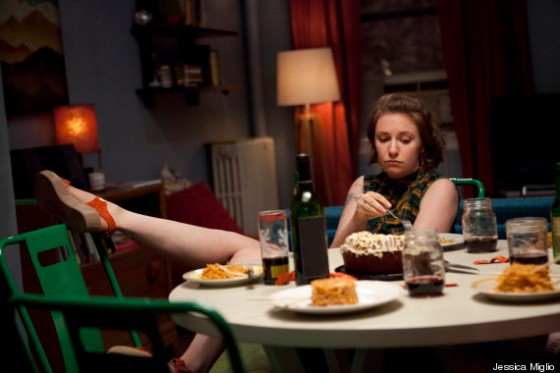 Hannah’s sans Elijah found the need to throw another dinner party to celebrate her freelance piece’s publishing (I didn’t realize that a piece on a cocaine fueled binge earning her $200 would pay for her attempt to cook an all-organic dinner).  The dinner is not without it’s controversies including the continued love-triangle soap opera of Marnie, Charlie and that annoying head band wearing chick Audrey.  Not sure what’s going on with Audrey who confronts Marnie for always being around Charlie and her.  She also calls her a “Stepford Psycho” (come on, she doesn’t look plastic at all!)  Marnie is called out for using Charlie when she went to his apartment the night sex with Elijah didn’t work out.  This love triangle in my view is only going to end badly for one of these ladies.

According to Dunham, Marnie abused Charlie and their relationship who is now in his relationship with Audrey is mirroring behaviors from his previous relationship.  I think when Hannah calls for Charlie to choose which lady (Marnie or Audrey) should leave the party because the verbal argument was getting little too “Waspy Brooklyn Bad Girls Club” (where instead of physically violence, these girls attack each others fashion sense, professions, and drink lots of alcohol like rival sorority sisters during Greek Week).  Notice you always see Marnie drinking something strong when she is in a room with Audrey, because she can’t stand to see the sight of her. 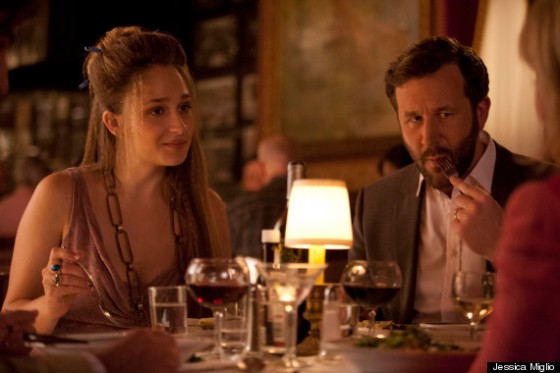 The on-going marriage life of Thomas-John and Jessa finally comes to end (after 2 months and trust me they were lucky they lasted that long!) Thomas-John’s parents are coming into New York to visit their son and his new wife (I am assuming they are WASPs from Connecticut).  The on-going argument with Thomas-John and Jessa is her need for sex and his need to try and not have his wife embarrass him during this dinner. She does everything you are not suppose to do at dinner because she felt judged by his parents who are trying to figure this bohemian girl out.  Jessa revealed she only went to Oberlin College for 7 months because she left to go to drug rehab for a heroin addiction.  She explained, “Don’t worry I never shot heroin, I only snorted it.”  Thomas-John tries to tell his parents that he working with Jessa to find a career, possibly in graphic design. He tries to deflect all of Jessa’s shocking and revealing facts about her past, so he looks good to his parents.  I got a sense from this dinner that Thomas-John was possibly an only child as his parents felt a sense of needing to know everything about Jessa so they could determine she wasn’t some young 25 year old gold-digger only married to their son for his money and possibly his family money? 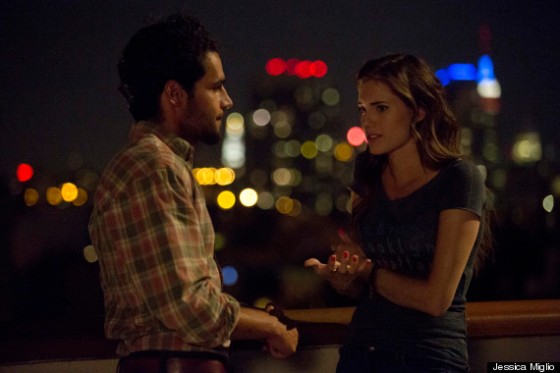 Marnie’s retreat to the roof of Hannah’s building has her looking confused about where her life will be taking her. She has an enemy in Audrey, a friendship with Hannah in need of emotional CPR, and Charlie’s best friend Ray always around to make her feel uncomfortable as he likes to be the person to point out everyone’s complicated relationships with one another. (Seriously Ray, it’s getting annoying!)   Charlie comes through the door to the roof to try and talk things through with Marnie. Surprise, surprise Charlie tells his former lover that Audrey is self-conscious of Marnie because she’s beautiful, clean, and smart. But Marnie’s not buying it. She’s hated Audrey ever since she saw her at the rave last season and even more upsetting to her, seeing those Facebook pictures of her and Charlie in Europe where for an episode she was depressed because she missed him.  Marnie has bigger problems than just her emotional baggage. She has real financial issues with her father losing his job, than her downsizing, (and her mother’s infidelity with cater waiters).  She tells Charlie, “I am a hostess!”  She used to be able to plan out her life and now she has to life live week by week.  It’s not fun to see but it’s something I and other young people can relate to.  What will the future bring her?

Charlie goes in to kiss Marnie and she stopped him because she is now in a relationship with Booth Jonathan.  Charlie immediately get pissed off and tells her that she will never have an opportunity to be with him again (yeah right, this is the same guy who can’t say a curse word without laughing like an eight year old, I view him as weak.) Just admit you love Marnie! Seriously Marnie and Charlie are this generation’s new “Ross and Rachel” (without all of the Rachel hair issues!) 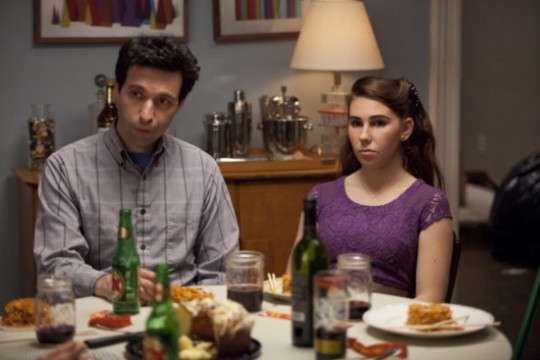 Also discovered at Hannah’s dinner is that Ray is homeless as his apartment was living in was owned by one of his aunts who was coming back to New York.  He explained that he was living between different friends apartment and suddenly the “Voice of Wisdom” (according to Dunham), Shoshanna realizes that her boyfriend Ray has been living at her apartment for last few weeks and didn’t know she was in a “live-in” relationship. (Her reaction totally reminded me of the first season finale when she freaked out at Jessa’s wedding because she was wearing white, because she didn’t know she was going to a wedding). I could only imagine if there was a JAP (Jewish American Princess) Miss Manners Guide to NYC Life, Shoshanna would mostly like have this book on her night table and would hope to one take contribute to the publication.  Shoshanna also expressed wanting to talk to her aunt about what it’s like living with her boyfriend.

I sort of feel bad for Shoshanna being that she is still in college and 21 years old, she is trying to figure out her life and she now beginning to become a woman with her discovery of sex with the help of Ray.  Ray somehow is trying to self-sabotage himself by trying to give her reasons to end the relationship but in the scene in the subway station where they each proclaim that they love each other as the subway was coming was something truly poetic.  The audience needs to the see the complexity of Shoshanna more than just young, Jewish, snob and really see the many layers to her.

The break-up between Thomas-John and Jessa looked like how two lost people would argue about the mistake and joke of their marriage. Thomas-John was in a narcissistic rant about how Jessa was only with him his money and that she only hooked up with him because he was the only financier who was able to make money after the market crashed.  This character seriously is full of himself and I question if he takes drugs. I love that Dunham really wrote Thomas-John into this show because we needed to examine the bi-polar nature of successful men in their 30s who are losing their minds over one night with a hot 20-something and all of sudden he wants out because his parents don’t approve.  Seriously and in the most-tacky way, he wanted to buy Jessa out to get her out of his life. She wanted $30,000, he offered $10,000 but she settled for “11 and a half thousand because she did things to him that she didn’t want to do”.

We end this completed episode with Hannah and Jessa hanging out in the bathtub.  I am guessing Hannah has found her new co-dependent partner in Jessa. Was this a symbol of Jessa cleansing herself of Thomas-John as she cries and blows a snot ball into the tub? Will the money from Thomas-John cover the rent to allow Hannah to continue running around New York without a care in the world? We all know that Hannah cannot live alone because she has issues and I hope it’s not Adam that tries to get back in her life emotionally and physically.  (Who knows he might still be in jail!)

Until next week GIRLS fans!