My biggest disappointment from the 2013 SAG Awards was actress and star of TV’s “Damages” and the movie “Bridesmaids,” Rose Byrne.  The Aussie actress is usually on my best dressed list (i.e. 2012 SAG Awards in a white Elie Saab Haute Couture jumpsuit) but she looked like a floral mess in Valentino. I have to admit since Mr. Valentino Garavani left the House of Valentino in 2008, the house has been missing the Mr. Valentino glamorous touch. 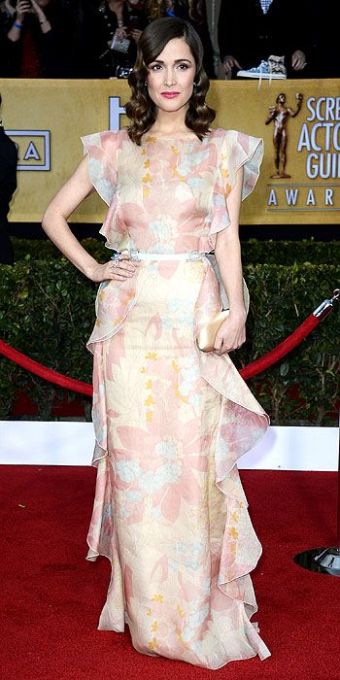 Rose Byrne in Valentino at the 2013 SGA Awards.

Rose Byrne Elie Saab Couture look from 2012 was one of my favorite fashion risks at an award show since Nicole Kidman wore a Christian Dior Haute Couture gown to the 1997 Academy Awards in a fur-lined charteuse embroidered gown.

I am all for the stars to take a fashion risk during award season but ladies please check yourself in the mirror before you leave for the red carpet. Just because you pay a fashion stylists thousands of dollars to help you get the designer gowns, shoes, accessories, and jewelry from the world’s best diamond dealers does not mean their fashion taste will make it work for you!

Fun Fact: The genius of Rachel Zoe occurred during the 2009 Golden Globes Awards, when the stylist contacted Chanel Haute Couture’s offices in Paris to inquire about altering a look from the Fall 2008 Haute Couture fashion show that she wanted Cameron Diaz to wear to the show. Creative Director, Karl Lagerfeld agreed to alter the gown and Diaz wore the gown was named Best Dressed in many different publications and even got praise from the queen of the red carpet, Joan Rivers!   Check out the runway look and Diaz’s look from the award show below!  I don’t think until that time a world-famous fashion designer was ever approached to alter the shoulder or any part of a couture gown designed and presented six month before during Paris Couture week in July 2008.  Zoe said on her than Bravo TV reality show, “The Rachel Zoe Project”, that she wanted the gown altered because she felt that an American audience would not understand the gown’s asymmetrical right shoulder detail (and trust me good call on Rachel Zoe’s part, because that was a confusing detail on the dress!)